.Here we are in the midst of summer. The birds are on their second hatchings. The first hatch had a high mortality from the extended cold of spring. But the heat is here and some hay has been cut. Before we know it, we'll be looking for a flannel shirt and seeing the leaves change.
This truly is a day that the Lord has made, let us rejoice and be glad in it 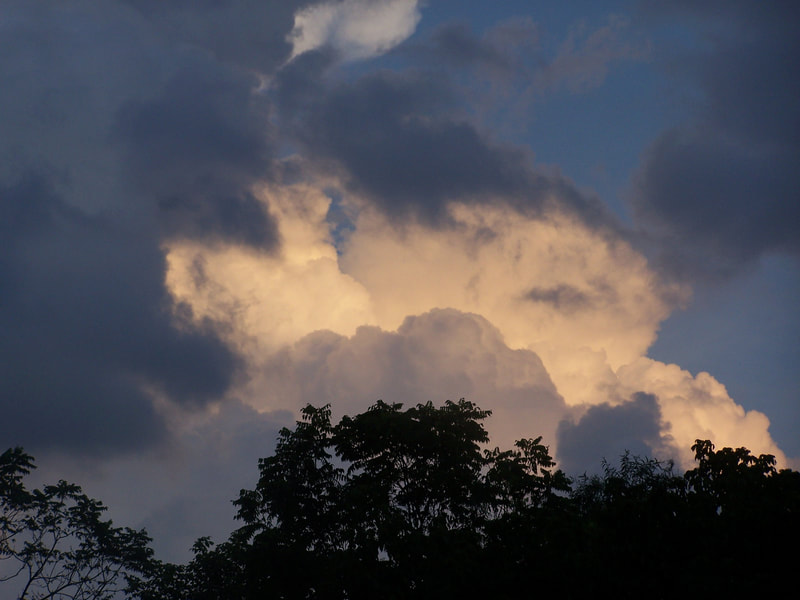 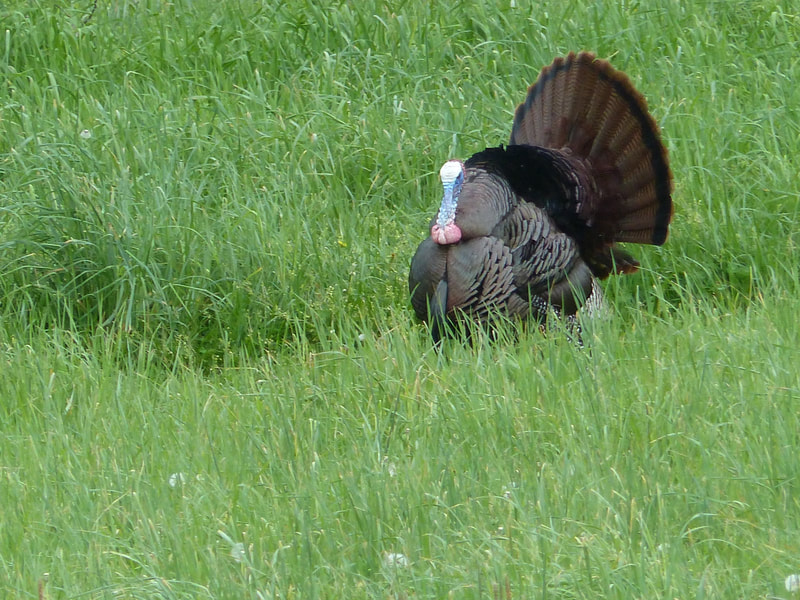 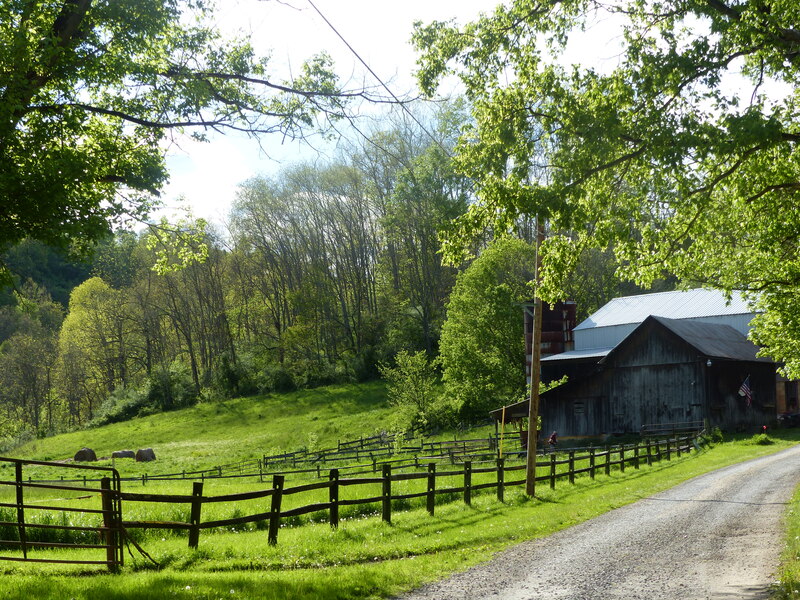 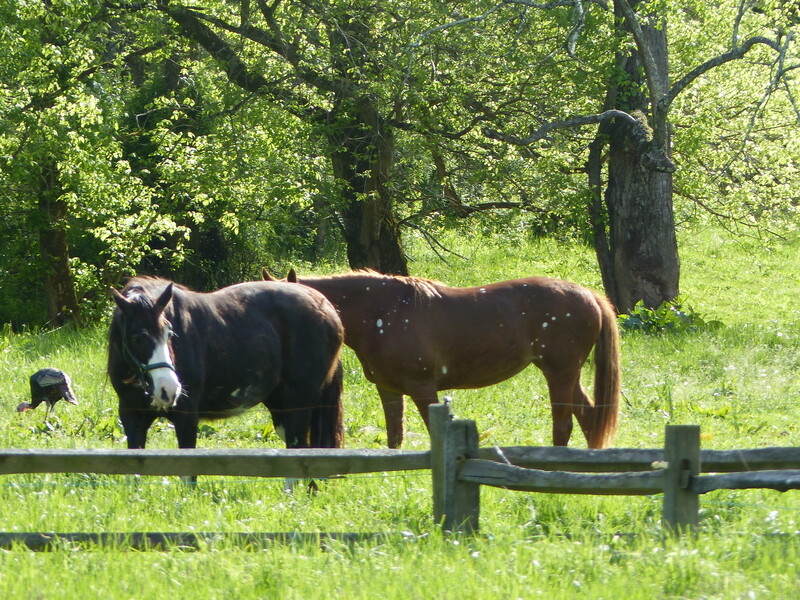 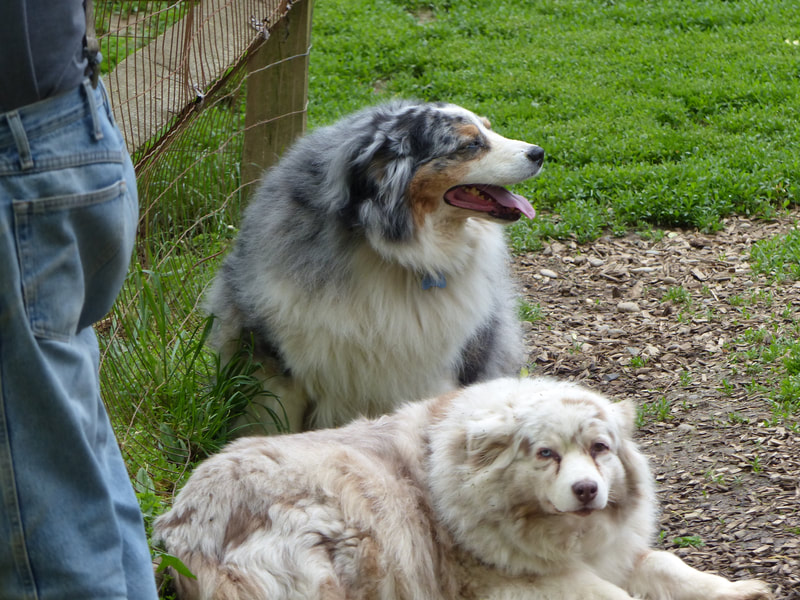 .We have puppies!!!! Born June 20, 2021. A Fathers Day litter.
There are 9 little rascals. They are all doing well and growing quickly. Mom is Aspen and dad is Cisco.  See more photos on the What's New page. 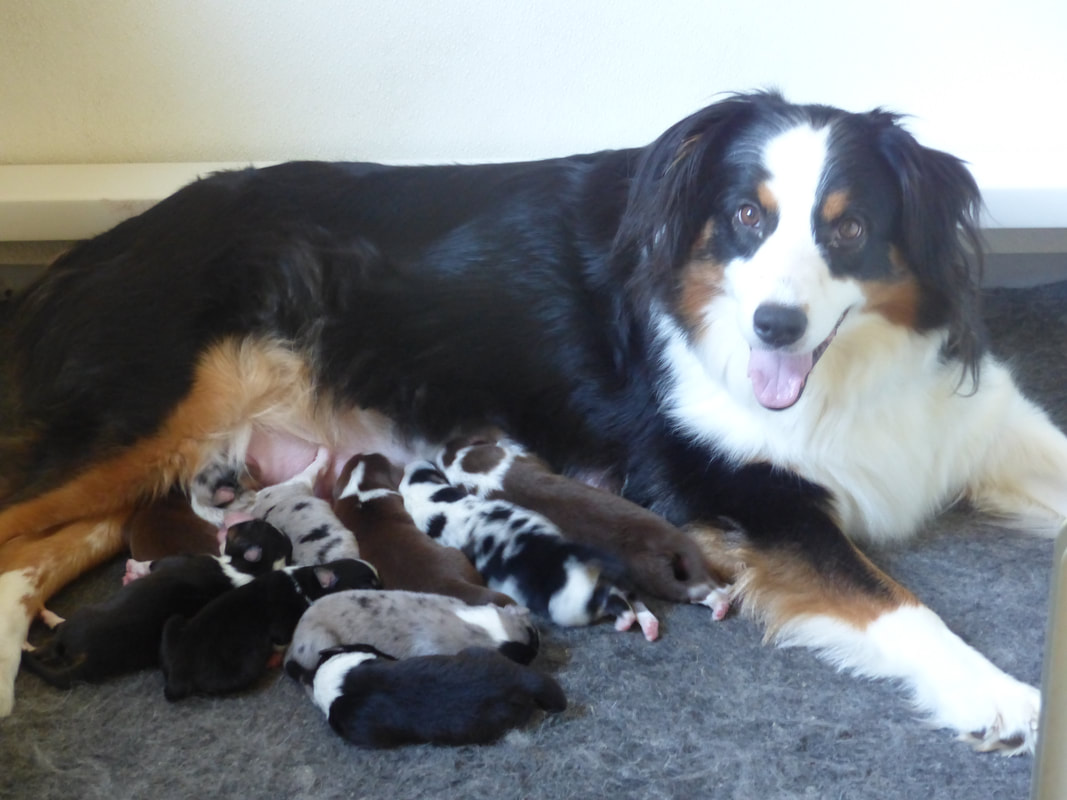 Flash! Interceptor is back on the market. It is a heartworm preventative in a chewable form. Some forms of it also deworm dogs of internal parasites including tapeworm. Novartis is producing Sentinel again.  It is heartworm and flea meds, and has been safe on Aussies. Revolution is still available also.  Some dogs throw up Trifexis. I would use the Sentinel or Revolution or Interceptor.  Do not get talked into Simparica, Simparica Trio, Heartgard, Iverhart, Advantage Multi, Prohart 6 or 12 injectable or any drug made with Ivermectin. Many vets do not know about the Ivermectin toxicity in Aussies. Heartgard has not been safe for all collie breeds.I also do not advise using Bravecto, Nexgard,or Simparica for fleas and ticks. These drugs have caused severe reactions and even death in some dogs. Call me if you aren't sure or are looking for sources for these medications.
I also want to add a word of caution to those folks who have a lawn service. Please check that gates are closed securely after the service leaves. Also consider that the lawn fertilizers and weed killers are toxic. Many of them can cause cancers in our dogs and ourselves. Please consider safer alternatives for your pet areas.
Please see "What's New" page for litters and pictures (updated: AUG 15,2021 ).
Scroll down on this page for Chapter 9 (Poco continued) in Heavenbound's story

When I had to accept that Blue couldn't breed anymore due to his advanced age, I took Amy to be bred to an unusually marked blue merle male named Barely Blue. At this farm, I saw a pup who was quite striking. He looked like a leopard appaloosa horse. I had never seen a dog marked like him. He was for sale so I worked out a deal for him and took him home. I was ecstatic!  Now I had my start-Amy and Poco. We were packing up our five acres in Cleveland and moving to a farm in southern Ohio. Poco helped with packing boxes.... or rather Poco helped with unpacking boxes. The idea of leaving stuff in a box was not part of his playful thought process. So we had to pack a box, then tape it up before walking away from it. Where Blue was the most compliant, people pleasing dog, Poco was the orneriest. As he grew a stubborn streak appeared. My other aussies were easy-going and biddable. Poco had a mind of his own. He was smart and friendly and quite taxing. We got moved in in August of 1988. Poco was 4 months old. He loved the hills and streams. He got to his teenage years and he looked pretty gangly. His nose was too long, his ears too high, his coat too short. He looked like a merle greyhound. I tried to return him to the breeder. I couldn't imagine anyone would want a pup like him. She implored me to hang onto him until he was 1 year old... thankfully I took her advice.
Poco stole shoes from the porch -- he snatched anything with our scent on it.  If he rode in the pickup bed to go up in the hayfields, he would soon be up on the cab roof, like a big cab ornament. He didn't understand my excitement!  I couldn't look away for long as he would be into some mischief. I decided he was bored, so I started obedience training. He didn't get it. I was very frustrated. My other aussies had been so easy to train. Rosie loved doing obedience so when I worked another dog, she tried to be a part of it. After my first frustrating session with Poco, I relented to her begging to be put through her paces.  I had her heel, stand for exam, stay, come, and  finish. Poco sat and watched. The next day, I tried obedience with Poco again expecting to be frustrated once more. Much to my surprise, Poco heeled, he sat, he heeled. He about-faced and heeled the other direction. He stood, he stayed. I was in shock. What happened? Was this the same dog? I guess he learned by watching Rosie. After that, he caught on easily. He always added his own flair.  He liked to have a say in what we did. Commands didn't yield as many results with him. He had a strong will that brought him alongside me. We became partners on equal footing instead of master and dog. I had to adjust what I thought I knew.
................scroll down for more on Poco.................. 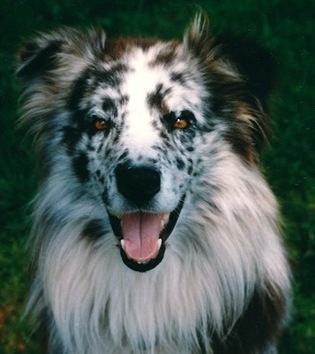 Poco
As Poco grew, we got the fields mowed and fences built, barns repaired, the house free of fleas, roofs replaced and painted. Blue passed away just short of 16 years. So Poco became King even though the queens ruled. I wanted a milk source but a cow would give too much, so we looked for goats. A lady nearby was selling a good milk goat and her 2 kids. I didn't want 3 at once, but she convinced us that goats were happier with other goats.So new fence was built with numerous strands of electric fence wire. We brought the goats home and put them in their new pen.The horses came to investigate. The goats didn't like their pen so they got through the wires and out with the horses. One horse we called Sam-mule didn't think goats belonged here so he chased them. We needed another plan. We put the goats across the road. The fence was 40" high. Not high enough for a goat! They jumped out and came into the yard area where the dogs were. Mama goat had quite a set of horns which she knew could be intimidating. Poco wasn't impressed by them, however. When the goats jumped the fence, I would call Poco and he would put them back over the fence. One day, Mama goat put her head down and charged Poco. He caught her by the nose and turned her around. She was bawling and trying to stomp him. He out maneuvered her and sent her packing back up the hill and back over the fence. After that if the goats heard Poco's name, they jumped right back over the fence. The grass in the yard wasn't worth a very sore nose!
Eventually, we bought some calves. We raised them on bottles, then grain, then pasture. One February, we had put hay out in the bigger field behind the barn for them, but they couldn't figure out how to get to it. They bawled and fussed wanting some food. I suggested to Poco that he could go push them out of the barn lot to their hay. He looked at me like "really, can I?" I told him to go. Out of the barn he went, right after the heels of two calves. He drove them part way out the runway to the field, then looked back at me.  I told him he was doing the right thing, but he needed to drive them further out to the hay. He set back on their heels, driving them out until I called him back. I pointed to the remaining 2 calves, and told him to put them out also. He was ecstatic that he had more to do! Soon they were put out with the others. He came back to me wiggling his butt like there was no tomorrow. He wiggled and waggled as only an aussie can. I praised him and he was obviously very proud of himself. I was amazed that he knew what to do just like he did this every day. He hadn't had any stock training. He just understood what I wanted and set about getting it done. Natural instincts are a pretty awesome thing to watch.
We had lots of groundhogs living on the farm. We needed to thin them out as their holes posed a danger to the horses legs. We would shoot them when possible. Many herding dogs don't like fireworks or gun shots. But Poco would see the rifle and sit intently until we shot, then race out in the direction we pointed to pick up the groundhog, finish it off, and bring it back to us. That way, we finally got the groundhogs out of the pastures.  Poco was a great helper on the farm, his natural instincts were amazing. 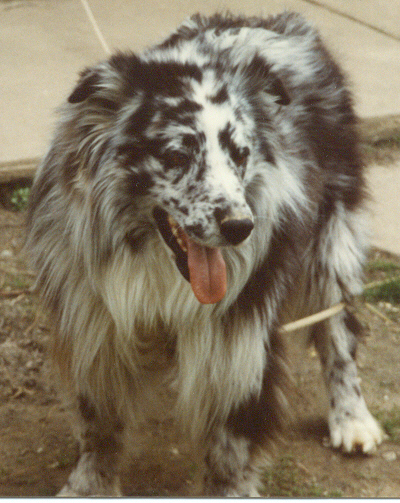 Poco
To read earlier chapters in Heavenbound's story, please click on the link below.
Watch for the next chapter, coming soon!

Download File
Heavenbound Farm has been home to Australian Shepherd dogs since 1973 and Missouri Foxtrotter horses since 1985.  We started breeding Aussies in 1978 and they have become a large part of life.  They are wonderful companions, silly entertainers, protectors of life and property.  Never a day goes by that I am not amazed by something new this breed can understand.

They know when sorrow is bearing us under; they join in the giddiness of rolling in a fresh snowfall; they listen for the sound of our truck engine and run to meet us at the door; they see the danger of a horse getting too close to us in the field and get in between to drive him away; they see the opossum and raccoon as thieves of our supplies and protect our goods and gardens; they snuggle in our bed (if allowed) and keep an ear out for danger while we sleep; they guide “our little sheep” away from harm by standing in the gap.  How could life be right without our Aussies?  What better friend could there be?  If you have never experienced an Aussie’s devotion, check them out—a great addition to a family and a wonderful companion if you are single.  Fun, adaptable, smart, beautiful.  They have it all!

Heavenbound is also home to Missouri Foxtrotter horses, the pleasure horse of today.  Smooth gaited, sensible, lovely to watch and ride.  They are good natured and medium sized horses that will return you to the barn less fatigued after a long day in the saddle.  More like a big dog than a horse.  Come try one out... "To Ride One Is To Own One."  See the Missouri Foxtrotting Horses page for more info on Heavenbound's horses for stud and for sale.